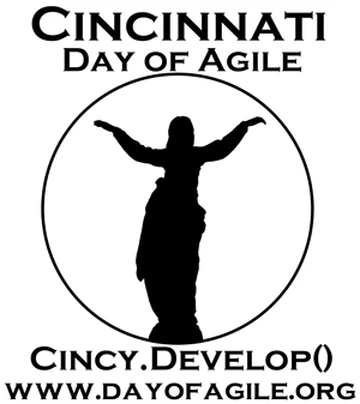 Want to add a caption to this image? Click the Settings icon.

Yesterday was the latest iteration of the Cincinnati Day of Agile and Cinci.Develop() conference. Phil Japikse, the conference founder, mentioned to us at the speaker dinner on Thursday night that his conference started out as a bar bet, and now has grown to a well-respected community event with over 500 attendees. This growth is just proof that a movement with good intentions can easily turn into something great.

The attendees this particular day were ready to attend some sessions on cloud solutions, so the mindsets of the audiences were more technical, however a there were also a good portion that were looking for some agile leadership guidance, and still others were coming for ways to learn how to strategically position themselves to become agile.

Karen and I spend the morning mostly putting on the final touches and mapping our strategy to our workshop presentation called the “Cloud Solution Throwdown” which was a fun format that I have used before to give self-organizing teams a safe, transparent, facilitated space to debate tough challenges in the form of matchups. In this case, cloud solution themed, and debated topics like virtualization vs. containers, AWS vs. Azure, and Relational data layers vs. NoSQL. At the end of the debate, the team then considers all the arguments and then makes a decision from a voting platform. The results of the voting is the agreed path for the team. In this case we used live voting.

This was the first time I attempted this format at a conference setting, and Karen and I had practiced this with two dry runs using innocent victims at work. That preparation would prove to pay off in the end. We knew that a conference was a setting that did not have a defined culture, and we were also challenged with the fact that there is no defined IT organization or products, so we had to create a fake one, a new ticketing system in the cloud for a worldwide soccer tournament. The lack of a culture was still a risk, though.

Karen and I were ready. We set up the room, donned ourselves in referee shirts, and presented to the crowd who seemed eager to see our format. Everything was going according to plan, however we started to sense that the crowd was not willing to try our idea, so we had to pull out one of our samples. Before I could think of one to choose, Karen just throws out, “Donuts vs. Bagels”. We held the donuts vs. bagels throwdown, and then the audience seemed more willing to try other throwdowns with our ticketing system.

The throwdown that got the most attention was the Relational vs. NoSQL data layer. The participants of the 10-minute fishbowl discussion presented some strong arguments. Cost was not a factor since both have free options, scalability would be a huge challenge if you decided to change from Relational to NoSQL, the learning curve for NoSQL was addressed but still a concern, and support for both seemed to be available and strong. Also for data analytics NoSQL was clearly a better option. From the arguments that were presented, it appeared that the clear winner in this throwdown was going to be NoSQL for our sample cloud solution. However, the winner is decided in the voting, and the results were stunning.

The 60-second live vote was as exciting as the Kentucky Derby, each refresh of the vote showed one side edging the other. In the end the result was something that is usually not planned for a throwdown – a tie! Although there are ways you can resolve a tie right there, we decided to break the tie through a show of hands. This time, the clear winner was the Relational model. The deciding factor was around the learning curve even though support resources exist.

So was the tie a letdown? My opinion, hardly! The results of the live vote show that NoSQL, big data solutions are starting to gain a lot of traction and visibility in the industry. Another factor here, and something we mentioned in our presentation, is that the conditions need to be right for a throwdown. In this situation there was simply not enough information for a true competition. However there were some concerns that were raised that would allow for a great experiment, namely support and the ability for developers to retrieve data. In this situation I would encourage the team to try to address these concerns, and treat them as a risk. Take a couple weeks to generate some arguments for and against what they find, and hold another data platform-related throwdown.

Also, those without skin here had a tremendous learning experience. For example, before we started there are those who didn’t even know what was meant by a NoSQL data platform. The facts learned in this session can be brought back and applied to everyone’s own situations.

The retrospective that Karen and I held at the end of our session with the audience was very valuable. The participants came up with some amazing ways to apply this format to their own organizations and teams. The most valuable thing we got from this retrospective is that we shared a connection with the participants, and although the moment was a short one, it proved that the hard teamwork, preparation, and delivery allowed the participants to take away something valuable that you cannot get in a pamphlet, and Karen and I have a shared experience that allows us to build upon what is looking like to become a strong working relationship. I look forward to our next challenge!

Agile Capacity Planning: How the Large Columbus Companies Do It

Establishing a “Common Language” on a Scrum Team