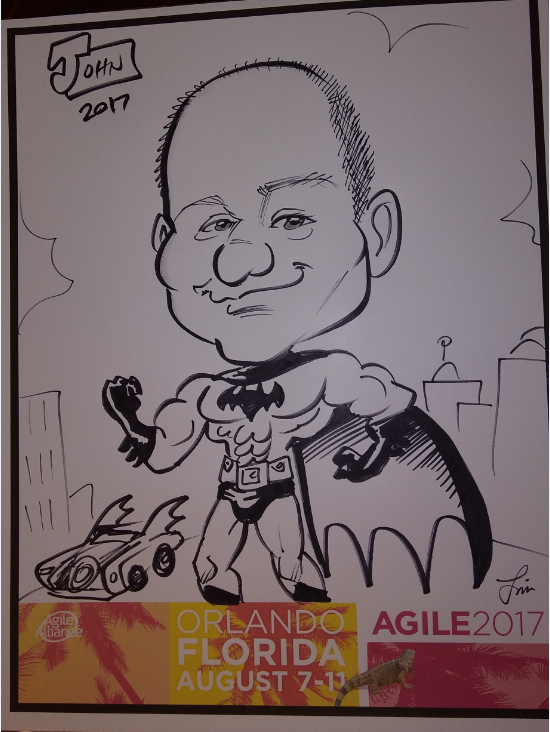 The moment had finally arrived to deliver my talk before the world. I left my hotel room with my presentation-ready laptop trying to get some coffee and breakfast. I found my colleagues Nate and Wendy who jokingly asked me if I had any plans for the day. I returned the sarcasm with a “not much” type answer. On my way to me session my thoughts only had one purpose in mind: deliver a successful talk. I was in the present, being myself, and ready to do what I always do.

The nice part of giving the first presentation of the day for a multi-day conference is that there is no waiting for the previous presentation to complete. It’s also nice to be part of a well organized conference like an Agile Alliance conference. Each of the 15 tables of 10 people had a stack of Rosen Shingle Creek pads and pens neatly stacked in the middle of each table. All the chairs were evenly spaced at the tables and the projector was on and ready for the connection to my laptop. I was immediately greeted by two volunteers, Trish and Roy, who collaborated with my on how they could help. We were able to come up with a plan to communicate microphone handoffs to the participants and other ways they could help me deliver a successful show. Adam was in charge of the AV equipment and helped me set up my laptop to the projector, which I was pretty confident would work since I tried it the night before. I’m happy I remembered my VGA adapter! Once the laptop was working Adam mic’d me up. Emma, the track chair, also visited to see if I was ready to go.

Participants started to arrive and sit down. I schmoosed with some of the ones that I met in the previous three days. I was happy people were showing up since this was the last full day of the conference, and the previous three days were exhausting, notwithstanding the die-hards who were partying all night and still showed up to the talk. Before I knew it, the time had come, and I started speaking. My polling of the audience showed a great mix of agile team members and those who were supporting team members.

I came to my first discussion point for the audience. I decided with the large crowd to allow the tables to discuss for 90 seconds, and then we would have an open discussion. While the participants were discussing I got a count of 55 in the room from Roy. The structure with the 90 seconds worked tremendously! I could easily see that I had an engaged room full of participants who were eager to know what was coming next.

The definitions and identifications of ATDD went about as well as they could. It’s a new concept to most people in the room, and I could see that most were thinking about how it applied to them. The feeling in the room was one of curiosity, which was confirmed with the few questions that were being asked.

By the time I ran the demo the eyes lit up, as they always do. Hey it’s a flashy automated testing demo. That kinda thing is cool, especially if you are not accustomed to seeing it work. I forgot to manually demonstrate my sample site. I realized it half way through the demo, and it was too late to start since the automated tests were almost finished.

The test suite finished with a green status. This is a huge tension point with me. Most of my time preparing for this talk is spent making sure the environment is stable and runs the tests in under 2 minutes. This time it was 1 minute 27 seconds. The discussion that follows was positive and thought provoking.

The next section of the talk was my warning slides – yeah this automated testing thing is great, but you need to get your teams in the correct testing mindset to be successful. You cannot simply start automating user acceptance tests and the world solves its problems. You need to evaluate your values, principles, and behaviors, and then you can look at your processes and tools. Unfortunately you cannot see a mindset, but you can see your processes and tools, so it is challenging to change your mindset easily. Until you change your mindset to a test-focused mindset, your efforts will be wasteful. I think that people understood this concept and my warning.

The remainder of the presentation explained metrics, and I also I fielded questions around concepts that led up to this point – one too many question I might add. I found myself energized with the discussion and then said, “OK one more question”. That put my total time for the talk at 77 minutes – 2 minutes over. Drats!

Want to add a caption to this image? Click the Settings icon.

I then finished with my favorite “Why this works” slides on the Marshmallow Challenge, and then the takaways. I had to hurry through these slides since I saw Trish holding up the countdown cards (10 minutes, 5, 2, and 0) faster than I wanted. My contact slide showed a picture of my Batman caricature drawn on Monday night’s ice breaker event.

Yea! It was finished. I still found myself energized from the participants coming up to me asking questions and wanting to contact me in the future. One guy in Columbus wanted to have lunch with me and pick my brain. I later found out that there were participants from Israel, UK, Philippines, and Russia all in attendance.

Working with the people at Agile 2017 was also a positive contributing factor. It is such a blessing to be part of a well-organized event and to be able to contribute to the awesomeness cannot be explained in words. There were two things that didn’t work so well. The first was the scheduling system tracking the participants that registered before the talk. It wasn’t used for any purpose other than to track if a talk was going to be “overbooked”. The second was that feedback was not solicited. Every other conference where I spoke or was a participant had feedback forms that were passed out by the conference. This one stored unsolicited feedback on the electronic conference schedule session. So needless to say, I didn’t get any written feedback. However, these two shortcomings did not take much away from the overall wonderful experience.

The contacts that I made over the week and the personal experiences cannot be measured or explained. At one point at the after-conference party I saw myself collaborating with Emma who is from The UK and Karen, who is another track’s chair from South Africa — three people from different corners of the world. What a great experience! With everything involved I am so happy that I went through the preparation and emotional roller coaster to put on a great show. I would easily do it again. I look forward to being considered to be part of future Agile 2017 events.